Home of the Summer Palace and the Imperial City. Epicenter of both cultural and political power. A hop and skip away from the Great Wall. All of what most Americans know about Chinese culture and history can be found in the capital of China, along with a few surprises such as emerging art districts and relics from the 2008 Olympics.

Attempting to describe Beijing after three days is like trying to paint a mountain after three minutes. The amount of detail, complexity, and nuance of a world capital such as Beijing cannot be properly absorbed in so little time. All I can do is express to you what I could capture with my pen, paper, and camera. I will leave the rest to your imagination. Let’s talk about the 6 reasons why you will not forget Beijing after you visit.

No, it’s not the “Pecking” Duck— Peking, the old name of Beijing, Duck is a step or two above the mallard back in the states your dad caught while hunting. Whenever you meet foreigners who have been to Beijing, this is one of the first things they normally bring up in conversation. Beijing is famous for executing the duck dish with style. With the number of spice, sauce and vegetable combinations in the city, there is a duck out there for everyone. Dig in, but try not to think of our good friend at Aflac. A monument to the immense wealth of the Chinese dynasties, the Summer Palace is a tranquil place to walk around. The huge garden was constructed solely for the recreation of a former empress during the hot summer months. This is one of those places that history buffs tend to enjoy. Fun fact: there is a one-kilometer long arched walkway that is covered with small, intricate paintings. A kilometer long painting. Let that one soak in for a minute. This attraction does not enjoy the international recognition of The Summer Palace, but it’s a much more interesting place to walk around if you enjoy the sights and sounds of modern China and street food. The lake (closer to a large pond) is surrounded by a series of bars, boutique shops, and classical street food (if you can fit it on a skewer, then it’s on a skewer). You can find anything from squid on a stick to a full tea set around the shores of Hai Lake. I bought some excellent post cards, but alas, I did not have the forethought to also purchase stamps. Oh well, they will look good on the wall too. This was the most pleasant surprise of my trip in Beijing. Art District 798 is a preserved industrial park that has been transformed into, you guessed it, an arts district. Inactive smoke stacks hang over small brick buildings and wide streets filled with people, dogs, and carts selling books that mosey around the exhibits. The exhibits ranged from modest coffee-shop sized showrooms showcasing Sichuan artists to multi-story galleries with price tags in the hundreds of thousands. People say that the district feels more like a slice of Berlin than Beijing—I don’t know if that’s true, but it was definitely to my liking. You may not know it by name, but if you have access to Google Search there is a strong chance you will recognize the Imperial Palace. It’s the ultimate symbolical monument of China’s authority, both in the past and present era. One of the misleading things about the palace is how huge it is. You walk in, walk up the steps, enter the huge center building…and enter yet another courtyard, with more steps and another huge building. If you go through with a tour group, take a bottle of water and some snacks with you—seriously. But don’t let the distance give you cold feet; some of the best sights in China require a little walking. To drive that point home, let’s talk about China’s most famous attraction. 6. The Great Wall of China

Mao Zedong summed it up succinctly; he who does not climb the Great Wall is not a true man. I will not attempt to convey to you how awesome this experience is—it’s impossible. Just know that if you have a time in your life when you are climbing up the steps of one of the most historically impressive military defenses in the ancient world, with tree-covered misty mountains continuing to the north as far as you can see in the early morning sun—know that at that time, you are truly experiencing something spectacular. After hiking 21 watchtowers and 10 kilometers, I now feel like a “true man.” Thanks for the tip, Chairman Mao. 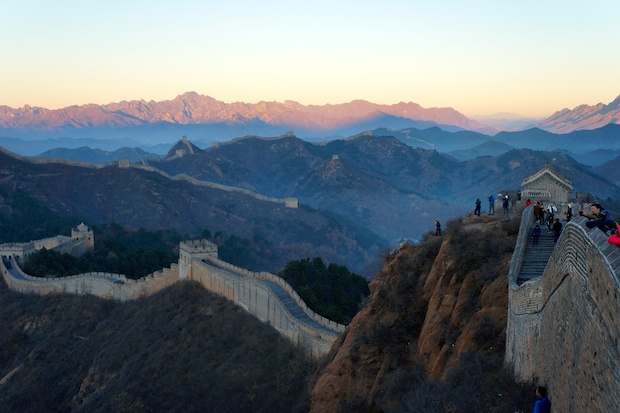 Beijing is one of those places in the world that leaves a man speechless. I cannot tell you much about the city’s history or the people that walk the streets, but I can tell you that one day, when I am an older and wiser man, I will come back again for a second look at this place I was lucky to see while still young.

Nathan Robertson is a student from University of Oklahoma and a TEAN Featured Blogger. He is is currently studying abroad at Fudan University with TEAN in Shanghai, China.  Nathan traveled to Beijing as part of an included excursion for the TEAN China semester programs.