One thing I didn’t think about before coming to Australia was that there were going to be many differences between grocery stores here and in the US. Each time I make my weekly trip to Coles or Woolworths, which are the largest chain supermarkets, it is always a learning experience. One of the nice things about Australia is that I can find most foods that I am used to eating at home, however, many of them have different names.  For example, red & green peppers are called capsicum, raisins are called sultanas, ketchup is called tomato sauce, arugula is called rocket, French fries are referred to as chips, potato chips are crisps, and the popular types of coffee are Flat Whites, Long Blacks, and Espressos. Not only are there different names for items, but products are measured on a different scale. Instead of measuring food with pounds, Australians measure using grams and kilograms. A few other things I’ve noticed are that there are chicken flavored chips, eggs are not refrigerated, and there is less variety in junk foods and freezer meals. 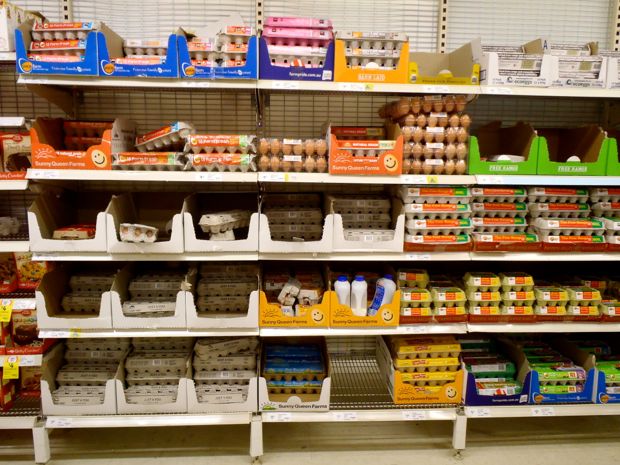 Now that I have adjusted to these differences, I have found some really tasty treats that I will miss once I leave. My favorite is Tim Tams. Tim Tams are similar to wafer cookies and have a layer of chocolate on the inside and outside. Since these cookies are a favorite here in Australia, a common thing to do is enjoy a “Tim Tam Slam”, which is basically using the cookie as a straw for drinking milk. It’s delicious! One concept that I really like and respect is that men and women equally participate in grocery shopping. This is quite different from the American concept of women primarily doing the food shopping for their families. Each time I go to the store, I always see men in business attire shopping on their own, young men shopping together or middle-aged men with their families. In Sydney, the majority of supermarkets are located inside shopping malls, which makes grocery shopping a bit hectic at times. Since they are located in such busy areas, they are usually crowded and chaotic. I typically find myself dodging carts pushed by people who are on a mission to get what they need as quickly as possible. When it is time to pay, the lines tend to cause heavy traffic for shoppers, adding to the craziness. The best way to approach grocery shopping in city stores in Australia is to make a list beforehand and go early in the morning or late at night to avoid the rush.

Caroline Burke is a student at Clemson University and a TEAN Featured Blogger. Caroline is currently studying abroad with TEAN in Sydney, Australia.