Nicole Gomes is a student at Saint Mary’s College of California and a TEAN Featured Blogger. Nicole is currently studying abroad with TEAN in Perth, Australia. What’s that jumping around?! It is a rat? No! A kangaroo? No! A wallaby? No! Then what is it? It’s a quokka! Now, you’re probably wondering what exactly a quokka is. I was too when I first heard about them. Quokkas are kind of like a mix between a big rat and a tiny kangaroo, but not exactly a joey, or even a wallaby. And where did we see them you ask? Rotto of course! The island is teeming with them, so it’s quite cool to see them go everywhere, like it’s a normal thing. Just a ferry ride away from the city of Perth and the beachy town of Fremantle lays Rottnest Island. “Rotto” as it is referred to, is a place where there are no cars, except the vehicles used by the workers, and the only forms of transportation for visitors is to walk, bike, or take the bus. It is an island outlined with beautiful beaches, prime for snorkeling, swimming, surfing, paddle boarding, or almost any other water activity. And Rotto is a place I had the pleasure of visiting twice, once during my semester break and once for a short weekend.

The first time I went was just my mom and I. After looking in brochures for places to visit, Rotto seemed to be mentioned consistently. When we arrived on the island, we biked around before setting up camp (just our towels as you can’t camp on the beach) at Parakeet Bay. Biking around was cool because we were able to take in the sights of the island, such as Pink Lake, named for obvious reasons, and we didn’t have to really worry about going the wrong way since we were on an island. The only frustrating part was that we didn’t know where we were going and the roads weren’t marked as clearly as we would have liked, so it took us a while to find the beach we were looking for. Before you start going anywhere, I suggest you and your group have a good look at the maps provided so you all have an idea of the direction you should be going. 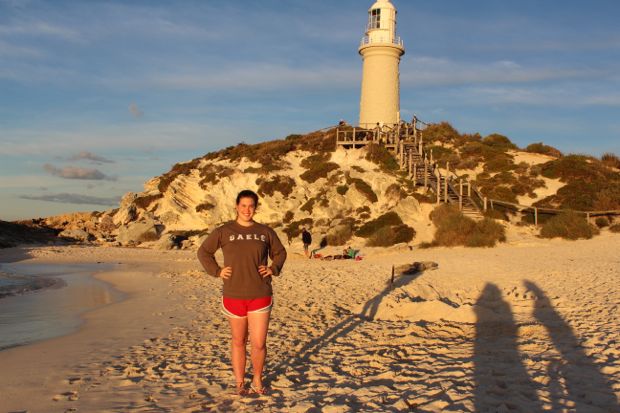 A few of my friends had gone the weekend before and after asking them what I should do and where to go, they suggested Parakeet Bay. Once we got there, I could understand why they liked it so much. Sitting on the sand, looking out at nothing but the ocean, and having the slight breeze is the best feeling. It is even better when there aren’t any other people on the beach. Even though Australia is technically into their autumn season and the water was a bit cold, I brought out the snorkel gear and went snorkeling for a few minutes before I saw a stingray (or manta ray, I can’t tell the difference) and got out. I’ve learned since then that they won’t try to sting you; only if they feel threatened will they shoot the barb at you.

The second time I went to Rotto was for a weekend with my dorm hall. We had heaps of fun hanging out, walking to the lighthouse, and watching the sunset. While we were waiting for the sun to set at one of the numerous beaches, there was a dolphin swimming further out, passing by! And at night, I finally came to understand why Rotto is so well known for the little quokkas, especially since they’re nocturnal animals. Once it got dark, all the quokkas come out. We called it the “aquokkalypse.” They were all over the place! It was definitely a sight to see. Both times I’ve been to Rotto I’ve had a great time. I would definitely recommend it as a place to visit for the day or even a few hours. If I was to do it again, depending on the amount of people going and for a different amount of time this is what I would recommend:

Just remember to rent bikes and snorkels, visit with the quokkas, and don’t forget to eat an amazing Rottnest Bakery meat pie!