From Farang (Foreigner) to Local in Under 14 Weeks 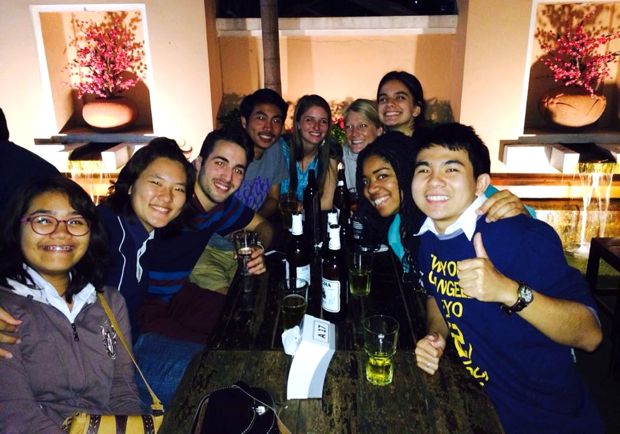 In January I boarded a plane to Chiang Mai, Thailand with the feeling that I was traveling into a completely new life. I was incredibly anxious. The kind of anxious that makes you want to throw up–a lot. I thought to myself, ‘you’re leaving your comfort zone for four months and you might hate it’. I was very wrong. Here’s how I went from feeling foreign (faring in Thai) to local in less than 14 weeks.

1. I Learned The Language

I knew about as much Thai as a newborn Thai child when I came to Chiang Mai.

This city is very developed and full of backpackers, making it somewhat easy to function without knowing how to say more than hello and thank you. However, I live in a non-tourist section of the city so the beginning of the semester brought countless songtao (taxi) rides that began with me telling the driver where to go, and resulted in walking a considerable distance to it from wherever we were dropped off.

As mentioned in a previous post on street food in Chaing Mai, I’m vegetarian. It’s not hard to be vegetarian in Chiang Mai since everything is made fresh and can therefore be modified to be meatless. Despite this, I managed to unsuccessfully order dishes without meat almost every time I ate at a Thai restaurant.

After weeks of taking Thai language and asking locals how to say this or that, I can proudly say that when I get into a songtao I’m confident I’ll be dropped off at my desired destination. I can be sure that the food I order will be meat free and the coffee I buy will be ‘nit noi waan’ (less sweet).

Also I can count to 100 in Thai so that’s a cool party trick.

2. I Learned The City

Once I mastered the art of telling a songtao driver where I wanted to go, my friends and I began seeing more and more of Chiang Mai.

We’d take a free day to get lost in the old city, or wander around campus, or stumble upon dingy Thai restaurants that pretty much require you to order in Thai.

If a passerby were to ask me three months ago how to get to Thapae gate or Suthep road, I’d probably look around aimlessly for a few seconds before admitting to being clueless. Now that I’ve gotten lost around this city and opened my eyes during songtao rides, I can almost always tell a fellow farang where to go. 3. Hang Out With Locals

I cannot express how incredible it has been having a Thai roommate. The network of Thai friends that us TEAN students have made has helped us not only learn Thai faster, but it has been a lesson in culture that very few backpackers experience.

When we travel, we realize how lucky we are to have friends that teach us how to interact with and respect the people of this amazing country. Chiang Mai having such a western influence allows for even long-term travelers to avoid the “hassle” of changing their behaviour to cater to Thai cultural norms. Living with and spending time with young Thais has made me more aware of my words and actions than I thought I could be, and my appreciation for that is immense.

These three simple steps to feeling local don’t seem like much, but they will surely help you feel more at home than you can imagine. By that, I don’t mean the home you left behind; I mean the new city you’ve turned into a home.

14 weeks after my flight into a new life, I can confidently say Chiang Mai feels like a new home.

Cara Taylor  is a student at the University of Redlands and a TEAN Featured Blogger. Cara is currently studying abroad with TEAN in Chiang Mai, Thailand.