One of our most commonly used expressions at TEAN is: “It’s not wrong, it’s just different.”

This mantra is certainly true when it comes to living and studying abroad in Thailand, a culturally rich country with unique customs and norms that can often be surprising or even frustrating if you’re not used to them. Follow this guide to maneuver common cultural do’s and don’ts during your Thai adventure.

When in doubt, just remember to smile. People smile to make it through all sorts of situations in Thailand – whether you’re laughing at a shared joke or dropped a plate of food in the restaurant. (Also always feel free to ask questions – it’s better to ask when you don’t know or understand a situation rather than making an assumption!)

1. DO Take your shoes off when entering a temple, someone’s home or if you see shoes lined up outside of a store

Feet are considered the dirtiest part of the body, so it’s very common for people to take their shoes off before entering a room to avoid trekking dirt inside. Under no circumstance are shoes allowed inside temples. 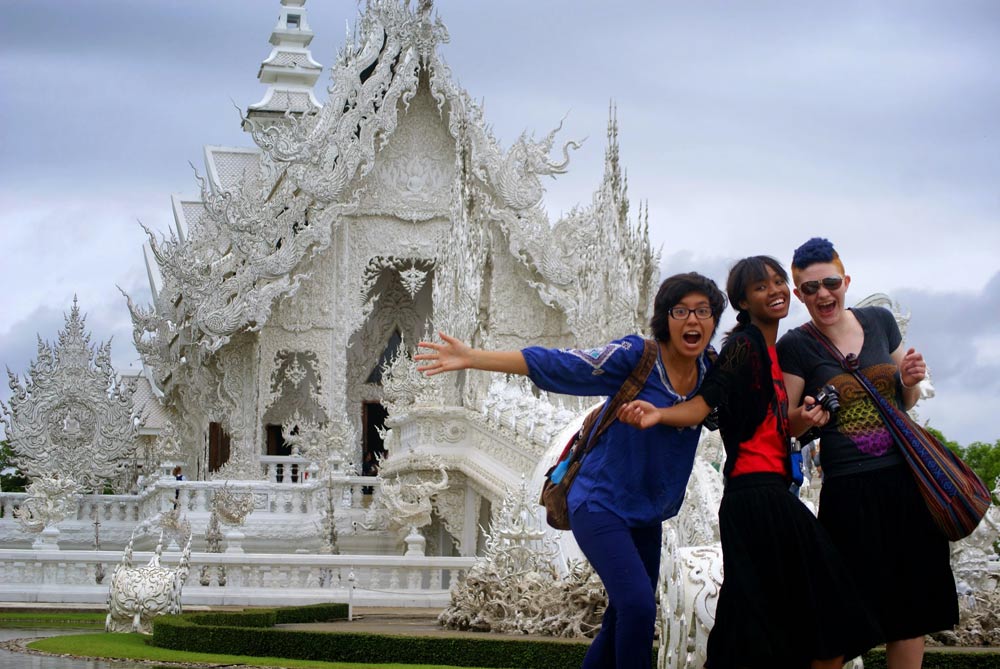 Wear clothes that cover your shoulders and knees while visiting temples and more rural areas. If you’re swimming in a waterfall, swim in a t-shirt and shorts. You’ll notice that local Thais don’t wear bikinis or one pieces because it’s considered disrespectful.

In general, Thais dress modestly and it is usually not appropriate to show too much skin. It’s hot in Thailand, but there are heaps of light, loose clothes at the markets that are both culturally and weather appropriate. Stock up on the ubiquitous (and inexpensive) harem pants to stay cool and modest while saving the tank tops and bikinis for when you go to the beach in the southern islands.

This goes for guys too – even if you’re hot it’s not okay to be out in public without a shirt on unless you’re at a pool or beach. (We can’t tell you how many times we’ve cringed seeing a tourist walking down the street in Chiang Mai without their shirt on!)

Thais generally avoid making scenes, even in stressful situations or if they are upset. If something is bothering you, do not shout, curse or raise your voice. Take a few deep breaths and channel the Thai philosophy of “mai pen rai”, which loosely translates as “no problem” or “no worries” and serves as a reminder to go with the flow. Losing your temper or getting visibly frustrated in public, especially toward a Thai person, causes everyone in the situation to lose face and is looked down upon.

4. DO Try to learn the language

Learning basic Thai phrases will help you get around town and locals will appreciate when you make an effort. Plus, it’s just common courtesy to learn a few key words and phrases of a country you’re visiting. It’s a fun language to speak (or at least try to!) so you’re bound to exchange some laughs with the locals and might even receive some discounts at the markets. Here’s some must know Thai phrases to get you started. 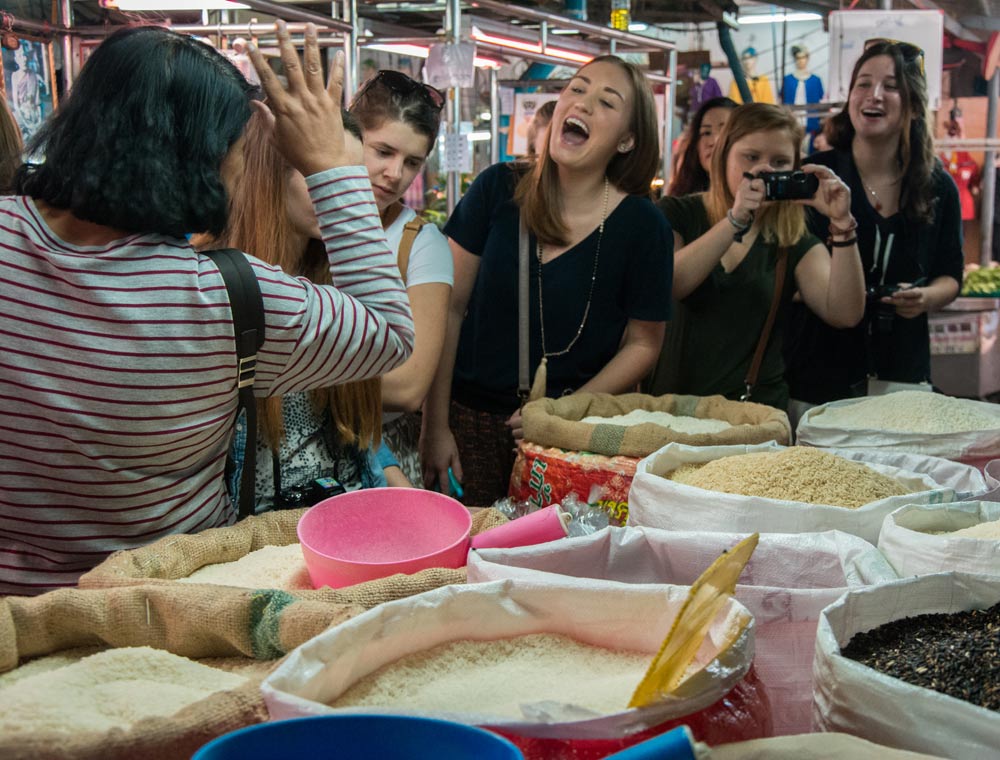 5. DO Remember that a small token of appreciation goes a long way

If you’re staying with a local family, bring a small token or gift of appreciation as a polite guest. Something from your home that represents where you’re from will help share a piece of your culture with the locals and express your gratitude for being welcomed into their community. That said, when it doubt, you can’t go wrong with grabbing a bunch of fresh tropical fruit to share.

1. DON’T Point your feet at Buddha images or directly at people

Feet are considered the dirtiest part of the body so it’s extremely disrespectful to point your feet at people, especially images of Buddha. When you’re at a temple, kneel with your legs to the back or side of you to avoid being offensive. Also avoid putting your feet or shoes on chairs or benches. 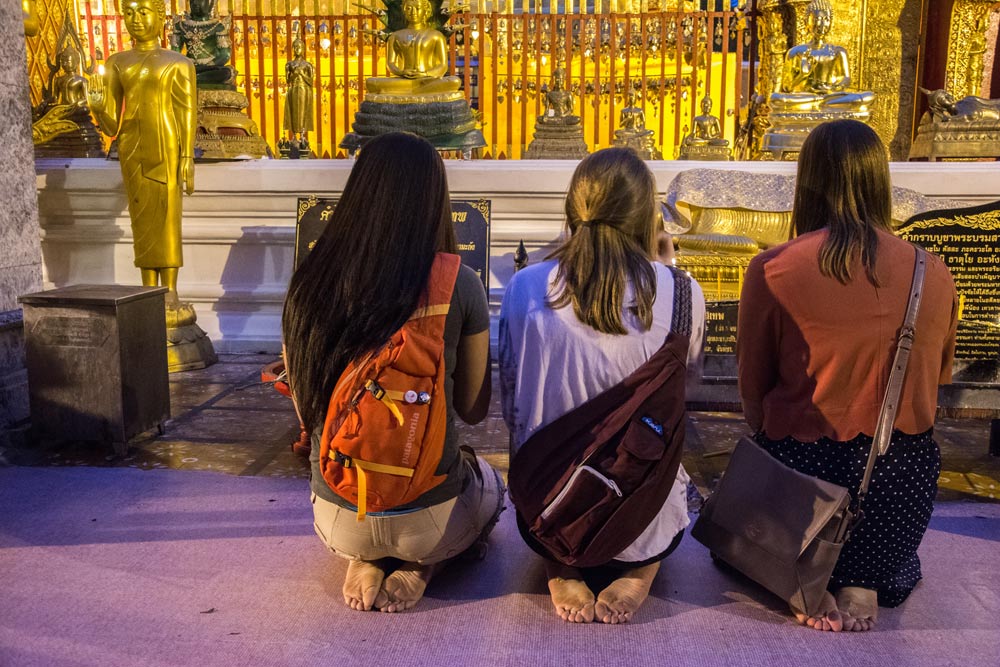 2. DON’T Touch people on the head

While the feet are the lowliest part of the body, the head is the highest and most sacred and people are careful not to touch others on the head, sometimes even including children, to show respect.

3. DON’T Speak ill of the king or royal family

Thai people have extreme respect and admiration for the royal family. Not only is it considered offensive to speak negatively about the royal family, it’s also illegal and comes with serious ramifications. It’s best to avoid political discussions in public so as not to say something that could be misinterpreted or offensive.

Thailand is a conservative country, so keep public displays of affection to a minimum while you’re out. Practice self awareness and observe the behavior of local Thai couples. 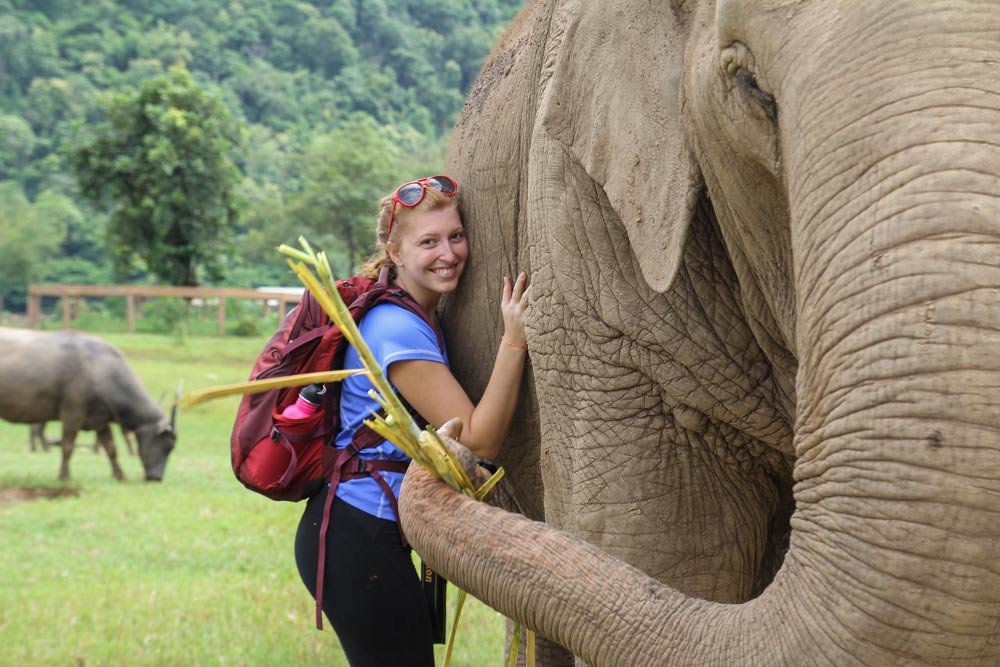 Elephants play a major part of Thai history and are still common throughout the country, so a common bucket list item is to visit an elephant park. Unfortunately, elephants in parks and tourist attractions are often mistreated and elephant riding is both physically and mentally harmful to the elephants. One way to enjoy the majestic creatures while also ensuring that they’re being treated appropriately is to visit an ethical elephant park and never, ever ride an elephant.

6. Don’t Make physical contact with or sit next to a monk if you are female

Monks take hundreds of sacred vows when they’re ordained, one of which forbids them from making physical contact with women including brushing past them or even handing them objects.

While it may seem like a lot to remember, don’t worry! You’ll love your time in Thailand – it will just be made even better by being aware of these cultural practices. Brynne’s first experience overseas was when she studied abroad with TEAN in Thailand. Captivated by experiencing a different way of life, she decided to go back and spend the year after graduation teaching English in a rural Northern Thai town. After the experience of a lifetime, she became hooked on the love of travel and international education and landed her dream job working for TEAN HQ in Chicago.